Bethlehem City is hemmed in from the north by the separation wall and by the settlements of Gilo and Har Homa. Along the West of the city runs the separation barrier and the ever growing settlements of the Gush Etzion bloc. Along the eastern edge of Bethlehem is an Israeli road which limits growth of the city in this direction. At the moment the South remains open, but recent settler activity and outpost growth has started in the south of Bethlehem, choking Bethlehem but also choking any hope of peace. In a previous blog I discussed Khallet Annahlah and now I want to discuss other setttlements in the area.

Shedma was originally Ghosh Gharab military base but the Isareli Army pulled out in 2006 leaving the base empty. Situated in Area C the base is under the full control of the Israeli Military. The local Palestinian municipality applied to the Minister of defense to build a hospital and a playground, and this request remains with the military having never been approved or rejected. In response to this the area was taken over by settler organizations such as The Women in Green (Their website here – Info on the group here) who have worked to maintain a presence in the area and keep it in Jewish hands.

While there is no permanent presence in the form of an outpost there are regular events and here and it remains a key priority for the group. The Women in Green claim that this is an important location as it guarantees the security of Teqoa settlement and the road and is part of the land of Eretz Yisrael which should be a jewish state. Developing it allows then the development of Jewish links from Jerusalem, through Har Homa and Shdema to Teqoa protecting this jewish land. As can be seen from this map posted on a Women in Green website Shdema is key to linking the settlements of Har Homa and Teqoa and cutting of any growth for Bethlehem, illustrating why such settlement projects undermine a two state solution.

Map from the Women in Green website showing importance of Shdema in linking Teqoa and Jerusalem and showing how Bethlehem will be hemmed in from the east.

Peace Now (an Israeli organisation campaigning against settlements) have reported that Teqoa settlement continues to grow and that new caravans have been placed in the area. Any growth in this settlement is of serious concern, both due to its location far from both the Green Line and the separation wall, and because the local Palestinian Village of Tuqu’ has already faced violence and intimidation in the past from Settlers which will only grow as the population grows. When we visited Tuqu’ the settler graffiti was still visible in the town, and the front of the village has been covered in Israeli and settler flags – marking the place as their territory in a challenge to local Palestinians . For me it was reminiscent of the painted kerbstones seen in some parts of Northern Ireland, however here it is as if you paint your neighbours’ kerbstones your own colours as an act of intimidation. In previous years there has also been attacks on Palestinians by settlers and attacks on the village’s agricultural land along with both settlers and soldiers preventing Palestinians reaching their own land. 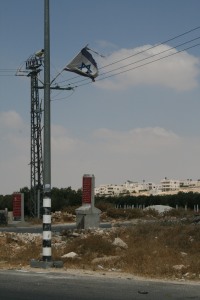 As well as the actions of the settlers the village of Tuqu’ has during my time here suffered more and more raids from the Israeli Army, who come into town and cause protests which are responded to with tear gas, sound bombs and rubber bullets. One of our first trips to the village was to meet and 11 year old boy who had been shot in the face with a rubber bullet. . There is also a heavy presence of the military at the schools of the village, claiming that children are throwing stones at cars. This team is regularly present at the girls school and junior school due to the intimidating presence of the army and the negative effect it has on the very young children . The Mayor of Tuqu’ has also reported that the main road to village, which has a permanent army post, has been closed by the army recently on several occasions, always without explanation or reason, part of the ongoing harassment of the village as a whole. 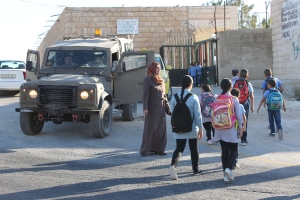 Like Khallet Annahlah discussed in a previous post these settlements are east of the Separation Wall making any growth here not only illegal as all settlement are under the 4th Geneva Convention but also a significant threat to peace. As seen by the map above the aim is to have a clear route from Jerusalem to Teqoa. The building of settlements at Khallet Annahala would open up the possibility of creating a road across a bridgehead of Area C, completing a circle around Bethlehem from Efrata to Khallet Annahlah on to Teqoa and up, via Shdema and Har Homa into Jerusalem, creating concrete facts on the ground that will ultimately de-rail any hope of peace.

While the recent announcement of the confiscation of 4000 dunams  is bad news for the already squeezed Palestinian communities and for any peace process, there are other actions in the area that even more threatening. The land around the Palestinian village of Khallet Annahlah and the activity of settlers who have built an outpost there is a greater threat to any sustainable peace.

This site, which covers 1,341 dunams, was first declared state land in August 2004, making it part of the land of Efrata settlement with a plan to build 2,500 housing units on this site. The Palestinian landowners appealed this decision in the Israeli courts and the case has continued since then. In October 2013 a new outpost was established on the site, and in July 2014 a new road was illegally opened by the settlers in the outpost in the middle of the night. The previous Bethlehem team were witness to several incidents in the area such as destruction of local Palestinian farms and attending important joint Israeli Palestinian demonstrations in the area – for details see here.

At the start of September 2014 the Israeli High Court made a decision dismissing all the claims made by the local Palestinians. The landowners had sought to have the declaration overturned but there arguments were dismissed, with some significant facts not even being considered by the High Court. However the court raise some technical legal questions and has suggested returning the case to the appeals committee to have these answered and has sought the Israeli State’s consent to do this and no decision has yet been made, as such the future of the declaration remains uncertain and could yet take several years. For detailed discussion on the case and the ruling see here.

While the Palestinians sit in a legal limbo waiting for a decision from the court the settlers have shown by their actions that they mean to take this land regardless of what the court says and have been developing it as if they already own it. The site has grown from an agricultural area into a small outpost and the occupants have been increasing the number of buildings on the site, building illegal roads, and aggressively patrolling this area with their own armed security. In the last week our team accompanied a contingent from Combatants for Peace, an Israeli peace organization, and the Palestinian Authority on a tour of the area, when we were confronted by settlers who assaulted some members of the group. The settlers throughout this time have acted with the close support and protection of the Army, as can be seen in the report from the previous Bethlehem team detailed above.

While these, and all settlements in the West Bank are illegal under the Geneva conventions, this is a worrying development with serious implications for a just and lasting peace. The area under question is east of the established route of the separation wall, and as such marks an expansion not just of the number of settlers but also an expansion in the size and geographical reach of the not just Efrata but also the whole of the Gush Etzion settlement block. This would also block off Bethlehem from the south and given that Bethlehem is already blocked in from the north (by the wall and settlements), from the west (also by the Gush Etzion bloc) and from the east (by an Israeli bypass road) this would be a complete encircling of Bethlehem. Both the expansion of the bloc and the encirclement of Bethlehem would make any two state solution and land swap impossible to achieve, if this settlement is finally built it will kill any hope for peace. Worryingly, there is settler activity in other areas around Bethlehem making the situation worse which I will look at look at in my next blog post.

If this was the actions of one small group of settlers this would still be a significant problem, however there are many other groups of settlers working across the Bethlehem area to build other outposts and expand existing settlements all of which contribute to the cutting of Bethlehem and the undermining of any possibility of peace.