While based in Bethlehem we spend a lot of time out among the villages that surround the main city, some stretching out to the edges of the Bethlehem Governorate, into the Jordan Valley. One of these far flung villages is ‘Arab ar Rashayida, a Bedouin community out in the Bethlehem wilderness in the Jordan Valley. Here we met with Hajj Ali Oudh Rashayida and his family, a Bedouin farmer whose lands and livelihood are both at risk.

The family first came to the area when they were moved off their lands during the 1967 war, at this time they were settled in the nearby village of Tuqu. In 1975 they were given a house that was one 3m room and nothing else for the whole family. They left this and returned to their Bedouin lands around Rashiyda and continued their traditional farming and nomadic lifestyle. The family live in basic structures, rotating around several sites on their lands depending on the seasons, each time bringing their animals with them. There is no water and no electricity. They are looking for the development of a water pipe to a central place for families in the area, but they are unable to get the approval for this and do not have the money to build it for themselves.

The family told us that their land has long been declared part of a firing zone, a military training zone that is under Israeli state control which demands that the land be cleared and empty for military training. As a result of this they don’t have permission to build anything, not even to erect a tent. The future for the family is uncertain; the army can come at any time to demolish their homes, expel them from their lands and take away their animals without any further notice. This has been the fate of other Bedouin communities living within Israeli government imposed “firing zones” across the West Bank, especially the length of the Jordan Valley. The United Nations Office for the Coordination of Humanitarian Affairs (UN – OCHA) reports that 56 percent of the Jordan Valley has been declared a firing zone and is slowly being emptied of its Palestinian and Bedouin population leaving the land empty and under Israeli military control. 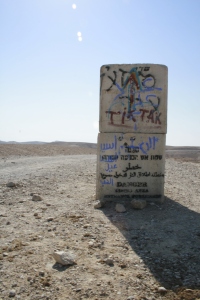 International Humanitarian Law expressed in the Geneva Conventions places an obligation on an occupier to protect civilians and to administer the territory in a manner that ensures their welfare and basic need. International law also prohibits the destruction or confiscation of private or public property, unless for reasons of military necessity, as well as forbidding the forced displacement or transfer of civilians. The treatment by the Israeli government of Bedouin communities and the use of firing zones to confiscate and to clear the land is in gross violation of international law.

Israel claims that the firing zones are required as an operational necessity for their military, allowing training and practice on land that is similar to land they will be fighting on and enabling them to prepare properly. However, there is in fact no military necessity – such needed land exists within Israel, enabling the state to satisfy its operational necessity without confiscating Palestinian land and without destruction of Palestinian property. The position of Israeli authorities is further undermined by the fact that Settler outposts within firing zones rarely face demolition despite being in breach of military orders as much as the Palestinian and Bedouin communities.

For now the family sit, waiting for what they know will come but without knowing when it will happen. Communities the length of the Jordan Valley face expulsion, their land being cleared of any trace that they once lived there. Firing Zones are just one more tool used by the Israeli state to confiscate land in flagrant breach of international law.